If You Have To Go Through Hell, Don’t Come Out Empty-Handed

Currently serving as the Senior Rabbi of the prestigious Wilshire Boulevard Temple in Los Angeles, CA, Rabbi Leder is an author, thought leader and lecturer in high demand. He is concluding a 225 million dollar campaign to develop the congregation’s historic urban campus to encompass an entire city block.

After receiving his degree in writing and graduating Cum Laude from Northwestern University, and time studying at Trinity College, Oxford University, Rabbi Leder received a Master’s Degree in Hebrew Letters in 1986 and Rabbinical Ordination in 1987 from Hebrew Union College. In addition to his many duties at Wilshire Boulevard Temple, Rabbi Leder taught Homiletics (the art of preaching or writing sermons) for 13 years at Hebrew Union College in Los Angeles. He is a regular contributor and guest on The Today Show, writes regularly for TIME, Foxnews. com, Maria Shriver’s Sunday Paper, and has published essays in Town and Country, the Los Angeles Times, USA Today and the Los Angeles Jewish Journal where his Torah commentaries were read weekly by over 50,000 people. Rabbi Leder received the Louis Rappaport Award for Excellence in Commentary by the American Jewish Press Association and the Kovler Award from the Religious Action Center in Washington D.C. for his work in African American/Jewish dialogue and in 2012 presented twice at the Aspen Ideas Festival.

Rabbi Leder has authored four books with his most recent titles, The Beauty of What Remains; How Our Greatest Fear Becomes Our Greatest Gift (published in January 2021) and More Beautiful Than Before; How Suffering Transforms Us, two books that illustrate Leder’s transformation on the subject of grief and loss.

Newsweek Magazine twice named him one of the ten most influential rabbis in America but what is most important to Steve is being Betsy’s husband and Aaron and Hannah’s dad.

Register today for up-to-date details about the lecture.

The lecture is a gift, offered at no cost to the community, through the generosity of Mimi Cohen and Saul Cohen, of blessed memory.

This year's lecture will be hosted on zoom. Sign up to receive more information. If you have any questions, please contact Matt Greenberg, CEO at 203-921-4161 or email at
mgreenberg@ctjfs.org 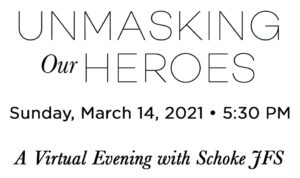